I’ve been around, and seen a lot of sand, from Maine to California and Mexico to Japan. When I announced I was going to Pensacola everyone talked about the wonderful white sand beaches in the area. Now, I know that sand comes in a plethora of shades and textures. The sand of the Arizona desert, for instance, is sort of tan and chunky. The beaches of Puerto Penasco have sand which is a bit finer and lighter colored, while the sand at Acapulco Bay is somewhat coarser and gray with a rainbow of speckles throughout. Still, sand is sand, or so I thought. 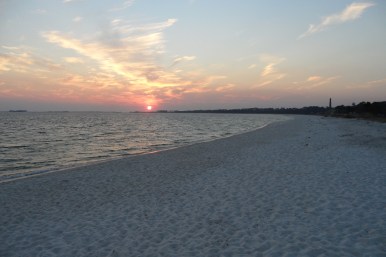 The sand along Pensacola’s gulf coast is finer, lighter, and whiter than any I have ever seen. The beaches which boast the softest sand I have ever walked through are also the cleanest I have ever been on. Nearly all of the debris I did come across came not from the ocean, but from the beautiful forest which shoulders the beach. The crabs we walked by seemed to like the beach just as much as we did. Indeed, the crabs easily outnumbered the people recreating along the shore.

If soft sand, a cool breeze, and the companionship of crabs over people sounds like your idea of a good time, the white sand beach near the black painted Pensacola Lighthouse is just the place for you.